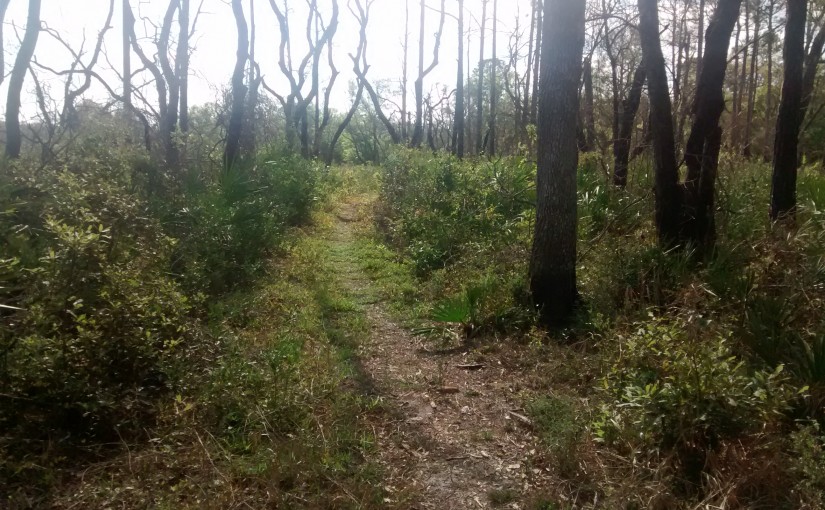 I camped just off the trail so I was aware of anyone who came through during the night. Early on a pair of riders came through, they stopped and chatted for a few then rode on. They gave me some word on the guys I had been waiting for which helped explain the delay in their arrival. Throughout the night two more solo riders came through, and just before dawn a pair of trail runners came by on a side trail that I hadn’t seen.

I broke camp just before dawn. Had a cup of coffee and started back down the trail. After a couple miles I ran into the pair from the previous evening. They had made camp at a ‘scenic overlook’, a mountain among molehills. After a quick daylight introduction I was off again. With only about 20 miles to the next check point, the goal was to get there before lunch. The ride partner I’d picked up the day before at the Mall was starting to feel some of the effects of riding the day after a long hard effort. He was starting to struggle a bit. I wasn’t put out by this, but I totally understand riding with someone and the terrible feeling you get when you think you’re holding them up. I’m sure that was only adding to the uncomfortable saddle and what appeared to be looming dehydration on his part.

In the end, we made it to the second check point with minor delays. One of the riders of the pair from earlier joined us at this point. His partner had business to attend and had turned back when they broke camp. While we were chatting and restocking, Karlos (the organizer) of the race pulled up looking totally spent. He’d decided at the last minute to ride the route himself, backwards (which is legal). Where my first day had been about 90 miles, he had ridden over 180, he’d camped in the swamp and was currently sitting at around 230 miles into the route. He gave us some sound advice about water holes on certain parts of the route. Looking at him and his bike, the knowledge was hard-earned on his part.

I could tell the guy I had been riding with all morning was ready to keep his own pace, so I decided to ask the new guy if he’d mind some company since his other ride partner had left. He was more than happy to have someone to talk with, and invited me to ride along. This is how I came to know LiiT (short, obviously, for Long island iced Tea).

After a last minute water check, we started on the third part of the route, the Green Swamp.

From leaving the second check, there would be no more sources of potable water for 55 miles, no food or other provisions for 67 miles. The route stays in low country, flat and largely water-logged. Mud and high water were the norm. Cypress knees and small fallen pines turned otherwise straightforward trail into some rather challenging riding. The 90+ degree weather wasn’t much help either.

In the middle of the swamp was the dreaded Devil’s Creek. Reports of the water level had it at ear level of 5’10” riders a couple of weeks prior to our approach. I’d hope it’s understandable that the 5’6″ author of this blog would have some apprehension about those sorts of water levels.

When we approached the creek, we stripped down to bare shorts (in preparation for this I’d decided to bring a pair of swim trunks as my ‘baggies’ that I wore over my chamois shorts/bibs. I also picked up a pair of Chacos so I wouldn’t have to be barefoot).  I left the trunks and my shoes on, but took everything else and draped it over my handlebars. Lifted my bike up over my head and began the crossing. More fallen trees and roots littered the bed of the stream, but the most welcome surprise was the cool flow of the water itself. In spite of being black, the water was cool, refreshing and presumably, rather clean. In the limited visibility I was able to see schools of minnows (no gators!). After we got the bikes safely across, we hung out in the water for a while to cool off. The thing I’d feared the most before the ride turned out to be one of the real highlights of the day!

From here we carried on in the swamp for some time. Eventually we got to a bridge crossing of the Withlacoochee river. It was time for some coffee.

At this point, trail broke to dirt road and eventually we got to the crossing of the Van Fleet Trail. The route takes the trail for a few miles, but the most important thing is the gazebo with a water spigot where we pick it up. We stopped here to fill water bottles and relax a bit. LiiT decided to eat some of the jerky he’d brought with him. I did what I discovered was one of the key things to do on long rides like this: the whore’s bath.

The day before I departed for Florida I made a last minute trip to REI and, among other things, picked up a small pack towel. This turned out to be the MVP of my gear selection. Dowsing this thing with fresh cool water, scrubbing off my nether regions, ringing it out and then patting myself dry was long overdue.

Within a minute of getting back on the bike I’d realized how good a decision this was. The sharp stabbing burning pains I’d been feeling in the saddle were gone. I felt like I was on mile 5 of a ride not mile 145. I shared my revelation with LiiT who was extremely upset that I hadn’t told him what I was doing when we were stopped (and he was staring right at me as I did it).

The Van Fleet brought me in contact with the first non-avian wildlife of the ride: some large turtles.

We turned off the Trail onto Water road. This is the road Karlos had warned us about earlier in the day. The road ungulates regularly and each trough was full of standing water. His advice had been: “Any water hole you can’t ride around, walk.” He’d apparently tried to ride through one of the holes and gone right over the bars. We found out how when we got the the first hole we couldn’t get around. the puddle starts out shallow, you get four or five feet into the water and it’s only a couple inches deep. Then, suddenly, it drops off and you are thigh deep in soft mud (and the occasional cinder block). 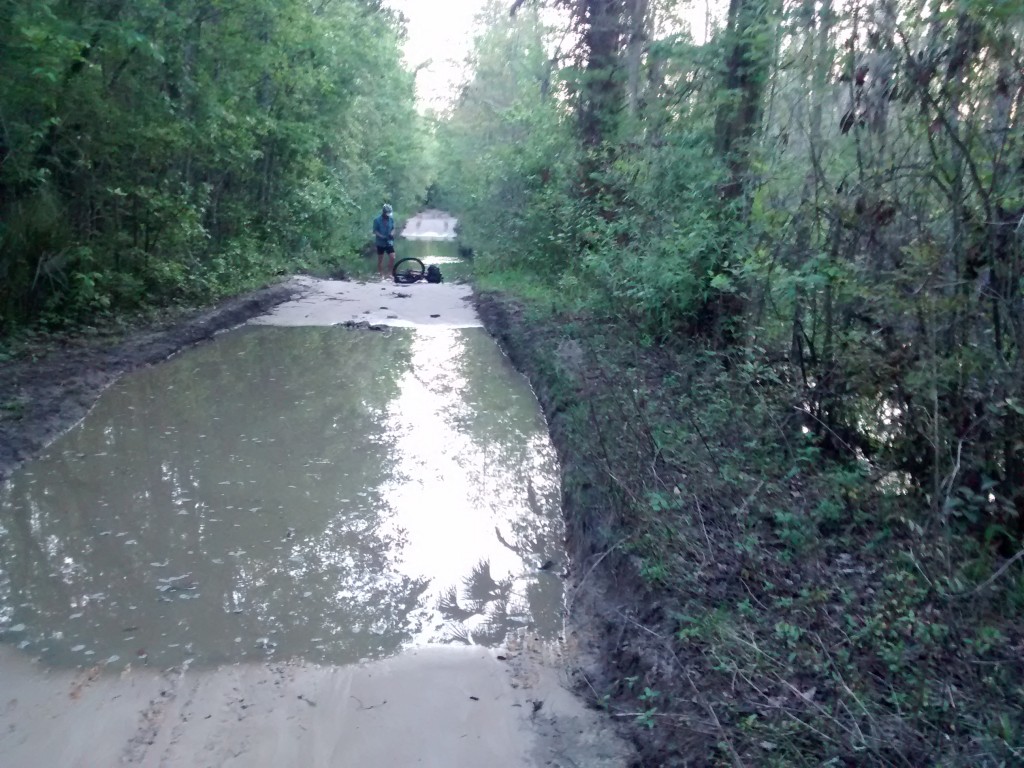 This road was also on the warning list from the riders in the previous weeks. One had allegedly been snapped at by an alligator lurking in one of the pools. Fortunately, they appeared to have all moved along by the time we got there.

Shortly after we finished up this section, LiiT started to feel the effects of the spicy jerky he’d eaten while I was bathing. He quickly progressed from a mild upset stomach to severe nausea. We pulled over on the side of the road and he sat down against a farm gate. After an hour or so of vomiting and trying to rehydrate, he finally felt good enough to try to get back on the bike. At this point though, it was well after dark and the route from here started to get into the most civilized part of the entire loop. Our potential camping spots were about to disappear for 40 or so miles. Neither of us were keen on grabbing another shitty hotel, so we decided to pull over and have dinner and talk it over.

We spotted a gate on the side of the road with a WMA sign on it (the road during the day had been nothing but farms and McMansions). We through the bikes over the gate, leaned them against the inside of the fence and made camp.

Day two was in the bag. More adventure was sure to follow.