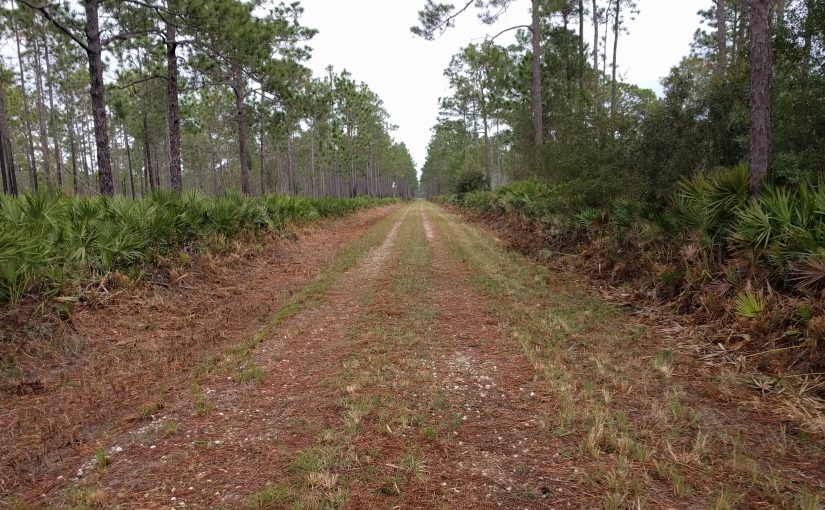 If you’re bummed because you think that the bikepacking season ends once the leaves have fallen and are also looking for a way to burn off some of that turkey-day-weight, look no further than SingletrackSamurai’s very own Cross Florida Individual Time Trial (CFITT). Here you will find 250 miles of mixed terrain and unique hidden gems as you traverse the peninsula from Atlantic to the Gulf.

The race starts with a ceremonial dip of your rear tire in the Atlantic Ocean and follows a very meandering route to cross the state, ending with the corresponding dip of your front tire in the Gulf of Mexico. Some of the route is familiar to Huracan-ers as it takes Florida Trail through Ocala National Forest and the Santos trails which were two of the highlights of the other route. Some other highlights are a hidden abandoned (never completed) monorail line, a stop in at a Roadhouse style bar in the middle of the forest, and a ferry ride across a river (sorry, this one is not fordable, even using a fatbike as a flotation device).

Being a point-to-point (rather than circuitous) route, the first challenge of the CFITT is to either figure out how you will get to the start or how you will get away from the finish. Karlos was kind enough to run a shuttle from the finish to the start for those willing to pitch in on the van rental. Hotels are readily available near the start so, in theory, you can get a good night’s sleep and be ready to head west bright and early.

Well, early more so than bright. Official start time is 5am. Why start so early you may ask? Remember that ferry ride? Well, it doesn’t run 24hours a day (nor does it run seven days a week) and it’s about 130 miles into the ride, so in order to make it possible to complete the route in one “day” you have to start pretty early.

Shortly after the horn, 75 riders funneled into a single-file slot to get off the beach and out onto the blacktop. A quarter mile into the race my Garmin decided that it didn’t want to play nice with the satellites anymore, so I spent about five minutes on the side of the road waving it in the air and rebooting it until it finally reacquired a signal. After that it was up an over the causeway and onto the mainland.

The first half of the route is a little pavement heavy. There’s a fair amount of rail-trail and a few little snippets of singletrack, some legit and some, like the section that parallels the monorail are just urban game-trail. Either way, Karlos does an amazing job of digging non-road riding from one of the more heavily concretized areas of Florida.

Dodging down bum trails, cutting through sand-road neighborhoods to get to small tracts of forestland with dirt roads, and hitting little bits of park trail here and there, before you know it you’ve burned away a hundred miles and it’s barely passed lunchtime.

When you do make it to the ferry, and you see the ferryman bringing the platform across the river to you, you feel a great sigh of relief. Or rather, I did as I put all of my eggs in the #maketheferry basket. I opted to save weight and didn’t bring any camping gear (tent, bag, etc) in the hopes that it would make it easier to get to the ferry, at which point I’d be able to push through the night to finish. If I hadn’t made it to the ferry in time (either because of slow riding or a mechanical or some other mishap) I would have been stuck there until morning. That’s not to say I was totally unprepared. I did bring a SOL bivvy just in case I had to lay down in the woods.

After a 10 minute float across the river you are dropped off in the Ocala National Forest. A few miles of forest service roads and you drop in to the Florida Trail for more of that typical central Florida forest through-trail riding.

We’d been pushing pretty hard to make it to the ferry crossing before closing so the plan at this point was to dial back the pace and just #partypace it to the Gulf. The problem with this plan is that we just finished 130 miles of relatively boring road (yes, I know, a lot of them were dirt, but even dirt roads can be boring). We were finally on singletrack and we didn’t have a big deadline looming over us anymore… so it was time to have some fun.

Florida Trail through Ocala isn’t technical, there may be a small punchy climb here or there, but for the most part it’s reasonably flat, mildly flowy trail. Apply speed liberally and you have a recipe for low-risk fun riding that covers ground pretty rapidly.

Pretty soon daylight was fading and we were a small hill away from one of the checkpoints: the 88 Store. Just before we got over the hill we could see a pair of headlamps headed towards us on trail. I thought perhaps this might be the two runners (yes, Karlos opened the race to runners this year and three people took him up on it, two racing west to east and one racing east to west). I had no idea what sort of pace one can keep on trails without wheels so I had no idea where they might be, so maybe it was reasonable to expect to see them here?! As the lights grew closer I could tell that these were in fact cyclists, and as they passed I recognized one of them (how could I not?), Kevin, LiiT’s friend… that must mean that the other rider was LiiT! Time for a safety meeting!

Last year on the HuRaCaN, I didn’t have a working GPS system to navigate the course and I ended up hitching onto LiiT’s wheel for three of the four days. As it happened, LiiT was signed up for the CFITT but decided (because, yeah) to ride the Florida Divide (an 800 mile north/south traverse of the state) backwards. He’d been working his way up from Key West for about a week at this point. The really serendipitous part about all of this is that the two routes (CFITT and FD) only overlap for about 10 miles, and we were just about at the end of that overlap. If we’d had to wait for the next ferry OR if he’d not hung out to talk to the folks at the 88 Store for a few extra minutes we would have completely missed each other.

After catching up for a second and seeing that seven days of riding across Florida can do to a man, we headed our separate ways and I got to the 88 Store.

After a short stop for a Coke and some food we dropped back down to the trail. Or so we thought.

Turns out, finding the 88 Store is easy, finding the trail after the 88 Store in the dark is another thing. After tracking and backtracking for about 10 minutes, we ended up bushwhacking a straight line along the GPS track until we hit Florida Trail again.

The trail drones on and on until you eventually come out of the western edge of the forest, cross the Oklawaha River (another checkpoint) and join the end of the HuRaCaN route back to Santos.

This bridge is another piece of evidence to back my theory that the Federal Government has a provision in DOT projects that if allowances are made for ‘alternative’ transport (bike lanes, etc), extra funding gets tossed in for free. This is why you’ll see a freshly redone bridge with a bike lane and nothing on the road on either side of the bridge. In this case, there is actually a separate mini-bridge adjacent to the main bridge that was intended, presumably, for some greenway-style project that never materialized, but it certainly funded the damned bridge!

Next up is Marshall swamp. I remember this part of riding the HuRaCaN being particularly awful for some reason. Maybe because I was exhausted, dehydrated, and just about non-verbal from excessive headset adjustments. I felt like it took forever for us to cross the ‘swamp’ last time. We crushed it. It felt like cruise to the grocery store this time. wtf? 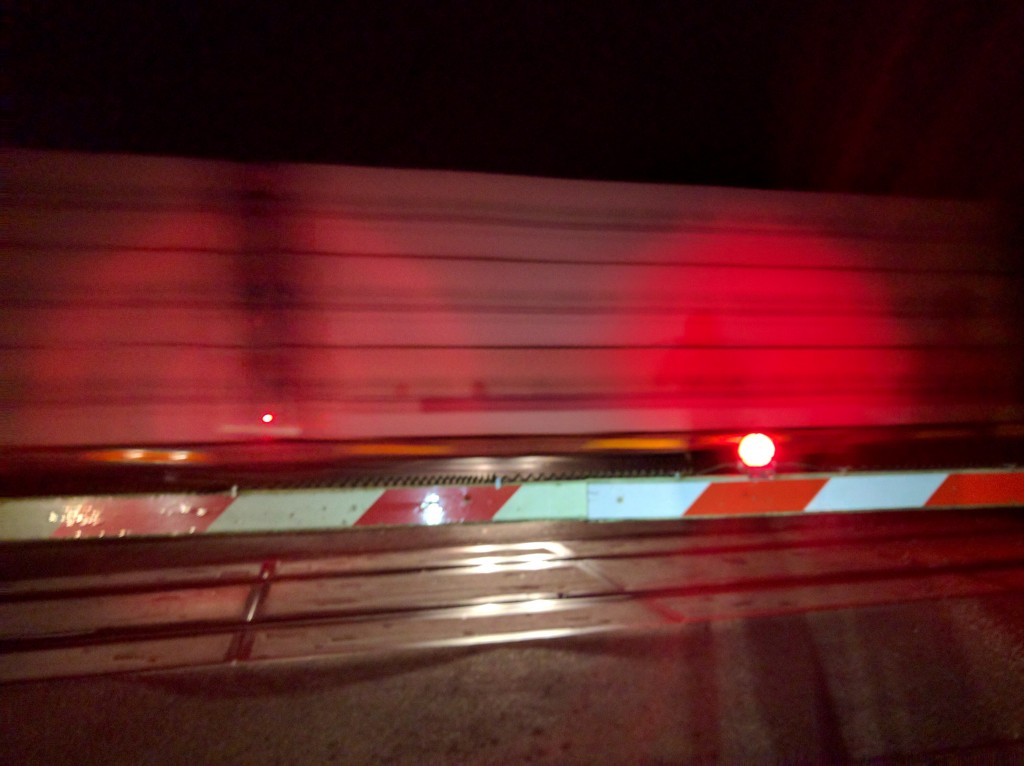 Speaking of wtf, what race would be complete without a trainstop?

Once the freight train passed we cross the highway and started on Santos. For the most part, CFITT and HuRaCaN coincide through Santos, but there are a few trail choices that are a little different. Either way, this was the second time I had ridden through these trails, both times in the dark and this time I had 180 miles under the pedals before starting. This trail took a lot longer this time around.

After Santos and Ross Prairie, the route makes its way over to the Withlacoochee Trail, but instead of riding down the trail like HuRaCaN does, it cuts behind the first trailhead restroom, across a retention field, into a neighborhood. I remember this spot very well because there was an anomaly on the HuRaCaN route last year (not that I had one) that made it appear that there was some part of the route that was back around this field (Karlos takes a lot of offtrail headset adjustments).

This was it, we weave through some neighborhoods, hop a fence, climb a hill, and boom we’re on a greenway down the causeway to the Gulf!

Turns out all that fancy Federal money for building bridges in the middle of forests can’t make its way over to neighborhoods. So instead of sensible, Romanesque paved roads, or even crushed and packed stone roads, what you find in western central Florida is apparently sugar sand roads! Make do with what you got, I guess.

Trudging up some of these dark, deep sand roads I began to take note of the tracks ahead of us. It seemed like no more than three bikes had come through (I didn’t think we were doing that well). One rider appeared to have no sand-riding-finesse at all and another appeared to just give up quite easily as I noticed a lot of footprints alongside one of the tracks.

Soon, I noticed a flashing red light ahead of us. Too slow to be a rider, someone walking their dog (at 3am?) perhaps? No, turns out it was Shane, a rider I rode with early on for a bit. He had apparently run into some trouble with his headlight, and shorted out all of his batteries and had been “riding” blind for the passed several hours. When we caught him he quickly got back on his bike and shared in our light (no harm, we offered it freely). After a few hundred yards though, he would surge ahead and disappear into the darkness, we’d find him at the next turn waiting on us. This happened several times until we got to the fence hop which he just could not manage without light. At this point he decided we were close enough to the finish to just sit on with us and not risk riding his bike off the trail into a ditch (again).

Pretty soon we were cruising down the greenway, passed my van in the final parking lot and off to a little spit of rock where we could dip out wheels and call this spaghetti done.

This was by far the longest non-stop ride I have ever done, and right about at the edge of what I would ever consider doing. After 25 hours of “riding”, I’d zigzagged my way across a state. Now it was time to toss my bike in the back of the van and lay down for a few.